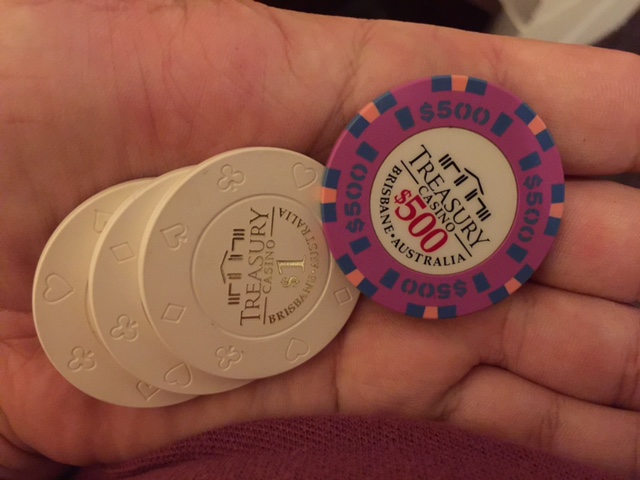 This was another session that I wasn’t expecting.

I’d been waiting for many weeks to get the table all to myself.

The first time this happened I was totally unprepared, and so nervous I was shaking.

Now was a different story. Just small nerves, which was good.

I don’t know what the normal amount of rolls are per hour, but I’m thinking it’s around 60.

By myself I managed to squeeze in 163 throws in around an hour. 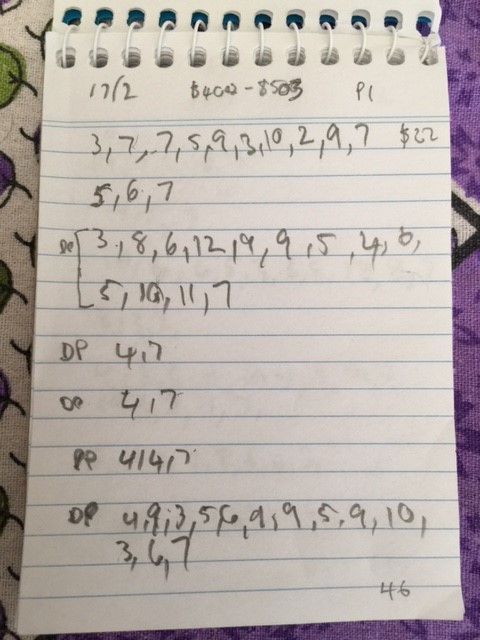 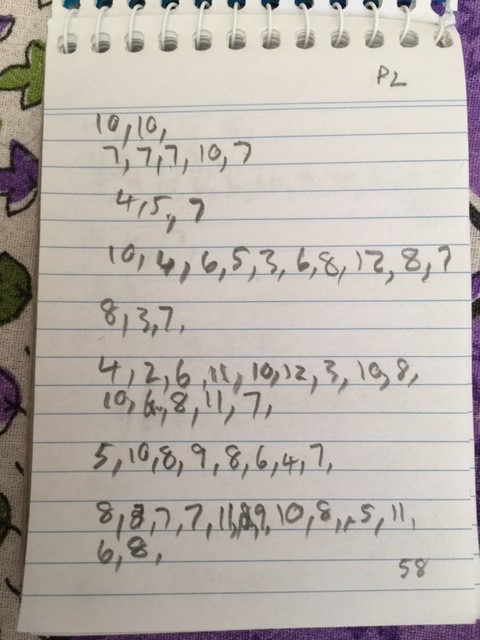 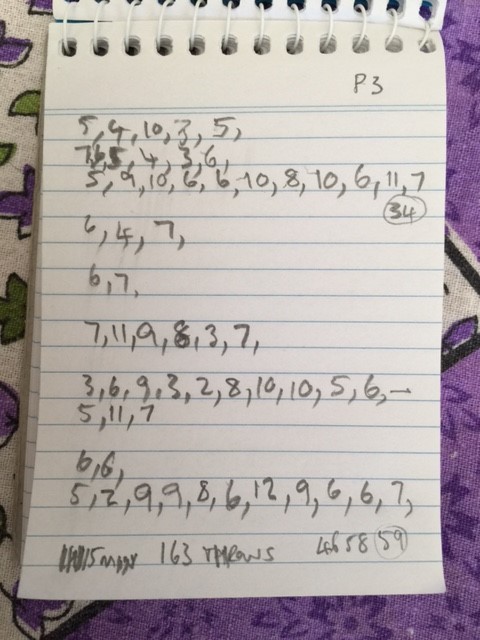 I was powering through the throws and bets. And I apologised to the the dealers since it would be boring for them with they way I bet. But they said they were enjoying the relaxed work. Since I don’t prop bet it was super easy for them. Box man had nothing to do. Stick just collected the dice and brought them back to me without any fuss, and the dealer was enjoying the simple setup / press and take moves I use.

By the end of my session, I was worn out. But in a good way.

I got to try out all sorts of landing zones and throw adjustments. It was fantastic.

I also had success with DP $10 or DP $20 and then setting for 7 and hitting it. If I didn’t hit it and get my point instead then I’d switch over and run with it.

I didn’t realise until after the session and looking at my charting that I got a 34 role hand. My best yet.

But mostly I was betting light. I tried a couple of $66 inside that didn’t take. So I stuck with $22 inside and build up from there.

It was a great practice session, which I hope to do again.

Looking over my charts it would seem that I could have done very well if I had of backed myself at $66 inside each time.

I wish I had of started charting sooner. But I’m only 1 1/2 years into my craps journey, so I’m really happy with my progress.

At the end of my hand, one regular player came to table, and saw I was throwing from the dark side. He asked if the table was negative, and I said to join me. He actually did.

And we both played dark on his hand. $20 DP layed $40 odds on 10, and $10 DC, and we both didn’t play any other numbers. He rolled the 7 two rolls later, and we both celebrated. It was so refreshing to celebrate a roll ending 7 out loud and the dealers were laughing. I never get to celebrate the 7 since everyone else is usually on PL, and I’m not into sticking it in peoples faces when I win and they lose.

Had to return to work, otherwise could have stayed much longer.

From the outset this was a session like no other I’ve had to date. I walked into the Casino following my nose to the craps table on the second floor, turned the final corner and my heart sank. The craps table was gone and 2 Caribbean Stud tables were in it’s place. I thought WTF is going on here.

Looked around couldn’t see any sight of it. Asked a dealer on a roulette table with no one on it, and she didn’t know.

Walked around until I found a dealer on the floor that I recognised that regularly worked on the craps table, and he pointed me to a hole in the wall off the main gaming floor. They had just 3 days earlier moved the table into a small side room, like a craps pit someone might have at home. I don’t know if this is it’s last position before being dumped from the floor altogether, but I look at it as a step in the right direction as it’s less noisy and has a nice feel about it. Downside, it’s not visible and won’t attract attention. I’ll make sure to be inclusive to all new players that happen to find the room and get them onto the table.

The table had no drop box and had not been setup yet, so my small lunch time 1 hour window was dwindling. They said come back in an hour. Damn.

Thought what the hell, and went to play some Mini Baccarat. Won $17.50 and went and had lunch and went back to work.

I just couldn’t help myself though, I had to try out that new craps table.

The table had been given a new lease of life with a new black layout. Very nice. It even was not as spongy under the finger press test as it was before.

I took an early mark from work and gave myself 1 extra hour to have a game of craps.

The dealers seemed much happier with the new table location as did the players, including myself.

Did the old one hit can’t miss play ($10 DP, $6 six and eight) on others, and was really itching to get started on my own game. With my trusty little notebook and small casino grade pencil at the ready, it was on… (not).

I promised myself I would try Heavy‘s $66 inside play, and I mentioned to a craps player (new youtuber Marc – search for Full Press Craps) that I would work my place bets on the come out.

With all my variables turned upside down already, I couldn’t include the $66 inside working on the come out play, I’ll save that for another session.

Long story short, I couldn’t get it going at all today. So embarrassing. Nothing past 6 rolls. 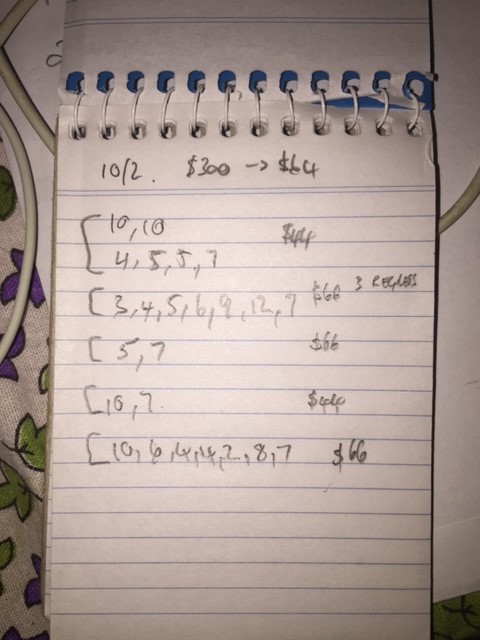 I’m still going through the session revisiting my throw and what I could do differently next week. I’ve got some ideas to try. The table is not as bouncy, and you can hear the dice a little bit as they hit the table. Never could before.

I actually got so frustrated that I stopped betting for a bit, and thought I’d try a few field bets (cringe) while waiting and looking for field twins to show with a Fibonacci negative progression. If a field hits then make a bet looking for the twin repeat. I worked my way up to $50 on field and lost that one as well and didn’t have the balls to pony up for the next bet. However as it turns out, if I had of made that bet on the next field twin, it would have won, and I would have dropped back to $10 then I would have kicked into my positive progression, and the guy rolled 6 fields in a row after that twin reversal. That would have been a very nice progressive field run.

Jeez, it was just one of those sessions.

Took a small notepad with me today for first time to chart my performance. Once again no one said anything from players or staff. I just leave the notepad in full view on the chip rail.

Haven’t played in SR-3 before, and I don’t like it much. I don’t like having 2 players + stick in front of my trajectory. I found it much harder to focus on my landing zone.

The table was choppy to cold. The others were bleeding chips every hand.

Surprised today because the $10 DP routinely got taken by a come out seven. Even the others were scoffing at me when that happened, but I don’t care what other people think of my betting methods.

I found it amusing that after my longer throw the other players were trying to remember what numbers rolled and I didn’t have the heart to tell them the real counts, since I had it sitting right in front of me on my notepad.

Longest hand for me today was 13, but really need to get a hand in the 20’s so I can benefit from my press method.

Doing a $44 inside and press up method really is no good unless you can hit a number 5 times.

But I was happy just to get moving on a hand to test it out.

None of my other hands paid off and I lost money.

So from a profit point of view, it’s actually better for me to do $66 inside (as Heavy suggested), 2 or 3 hits, and regress to $22 inside and then build up and out from there, so I’m actually making some money on as many of my hands as possible.

Otherwise I’m actually dropping $44 per hand + the unrealised profits I’m adding to the bets to get them up to 5 units before taking any profits out.

Took a longer lunch today and spent 2 hours at the table. Less time pressure was good and a real treat for me.

Had a bit of a chat with the dealers and it turns out that management are questioning having the craps table in the casino. The numbers apparently aren’t stacking up for them. I don’t believe it, as every Friday afternoon that I’m there they are pulling in stacks of cash from the regulars that don’t seem to be able to make anything happen. But the dealers were going on about the occasional $22K drop on the table when a few people win, and basically crying poor. What a croc of crap (pardon the pun). The real issue is that there isn’t enough new players. The dealers were talking about times when there are no players at all, and the management walk past an empty table and then blame the dealers and justify their position of closing the table.

Many times newbies come up to the table but they are made to not feel welcome to put their money down by the regular players. It’s up to the dealers to not let that happen. And I’ve noticed that the dealers have trouble enticing the new players to join in. If asked, they try to explain the whole game to the players, that then get confused and just walk away. I think they need to keep it super simple and sell the new players into the game with a $10 on Passline and get them into the game, and explain the rest later. This to me is a management problem where they need to look closer at the game, like I have seen over the last few months and they should be able to see where to fix it.

Craps is an expensive game to run compared to every other game in the joint. 3 staff minimum. It would be ashame for Brisbane greater metropolitan area (3.4 Million) to lose it’s only Craps table. I’m sure there is a solution and I hope it’s not to close down the Craps table.