I promised myself I’d get to play Craps this week after 3 months off. And play Craps I did. For the grand total of 30mins.

I couldn’t escape from work at 2pm as I’d hoped to see the table get opened. But as I suspected I was getting pestered by folks that can’t seem to do their own jobs, so expect me to assist them with constant hand holding. That’s a gripe for another day.

Anyway I ended up showing up at the casino at 3:55pm and was shocked to see a full table in use with the only available spot in SL-3.5 in the hook. I really detest this spot since it is not only hard to shoot from for me, but I can’t bet my DP cleanly because there is no clear DP box in front of me. I have to put my DP chips in front of someone else. It annoys me and them. Not everyone likes or understands don’t players.

I looked around the table and while I don’t know their names, I have seen them all many times before. Everyone was a regular.

So with the reduction in hours of the table i mentioned in my last post, it’s effectively squeezed the regulars into a smaller window of opportunity.

At least with a table in full swing throughout its open times, the management may not close it permanently.

I’ve never seen a table run so slow. With so many regulars it seemed like everyone (except me) had prop action. The middle looked like a Christmas tree with the baubles on it. Talk about a time suck.

The dice started in the turn near the SR dealer and after a few slow roles, I knew I wouldn’t get the dice today.

I started with my modified Target 3 play on flat bets PL and DP (not at the same time, I’ve discussed this play before) and did some very conservative place bet action of $6 on the six and eight and spread out to the five and nine from there as they hit. Aka one hit can’t miss style.

A wife of a regular was the final shooter for me. And literally you needed to have safety glasses on, for fear of a stray dice hitting you in the eye. I was standing 2ft off the rail and was still concerned for my safety.

She was dangerous with just the force of throw. I had a $10 DP on her and just had to lay $40 on it for odds when the point went to the 10. After a few rolls she hit the ten hard. Sigh. Reminded me of $5bill trip reports.

I made some money back off her on my place bets but I just didn’t have the time to recover in total.

Had to rush back to work. Will try again next Friday. And get back into the weekly craps groove.

Now as a side comment I went to collect my ticket for the special $1millon prize draw the casino is having in August and would you believe it, Craps doesn’t qualify for it. I was upset about that. So they are forcing people to play any other game or electronic machine. But not Craps. That’s a tell tale sign of how much they rate Craps players. Very sad.

Well it’s been ages since I’ve got to the craps table. 3 months approximately. I’m getting withdrawal symptoms for sure.

The biggest issue is that my local casino has reduced the craps table hours yet again.

No more craps at lunch time on Friday for me. The table doesn’t open until 2pm now. Which makes it really hard for me to get to the casino during the mid afternoon. They have also closed Sunday totally. So it’s only Friday night and Saturday night now.

I’ve had to console myself with playing baccarat instead. Not much consolation if you ask me. But it’s better than nothing.

What’s a first for me is to participate in a major casino competition. My local casino is having a huge $1million prize draw for August. When you play through the week you get a ticket to go in the weekly draw. I’ve never been the type to go for this sort of marketing competition. But since I’m playing at the casino weekly I figured why not.

I play baccarat and get my ticket each week and go in the draw. Then I go there on Sunday night for the draw and play some more baccarat.

Quick in and out round trip from the house and back again in 1 1/4 hours. How’s that for efficient casino hit and run.

Of course I have had my down swings were I had to leave the casino on at a stage in my negative progression that I would not normally stop at. But I just abort and pick up again from scratch not from where I was up to in the sequence.

I don’t like being at the casino on Sunday evening there are to many people. And I hate sitting next to someone on a row of machines.

Usually when I go the place is next to empty and I can have my pick of any machine I like.

My wife will only go when it’s quiet as well.

Overall I’m still pulling 26% return out of baccarat. I’m aiming to ratchet that up as my bankroll increases. But steady as she goes for now. Don’t want to get greedy. That’s the kiss of death. It doesn’t take much to go backwards and ruin at the good that has accumulated.

Can’t wait to get back to craps again. This Friday I’ll be there at 2pm to watch them open the table. And see just how awful my toss has become.

My home craps table is still in pieces. I’ve spent the last 2 weekends rebuilding it in readiness to join it back together again and make it fully robust and portable at the same time.

Here’s a picture of my home table end rails under some heavy glue action with clamps. 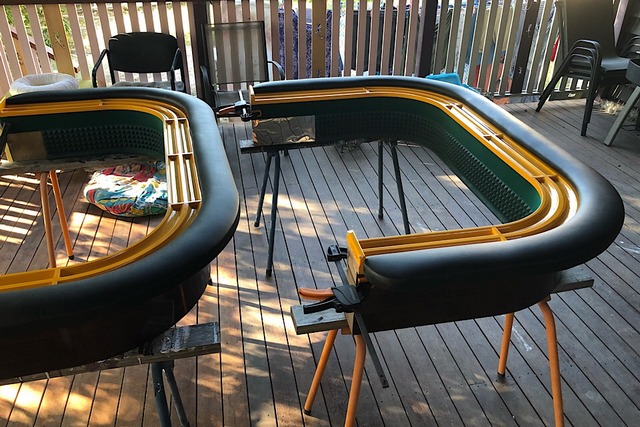