It’s been 12 months since I last played craps at the casino.

Regular listeners will know that I promised myself I wouldn’t gamble at the casino until my house renovations were complete. However it’s Christmas time and work friends wanted to go to casino. So what can I do. Peer pressure got me there today.

I’ve never played roulette before. Never. And my work friends wanted to show me how. So what the heck, I’ll give it go.

What I did find amusing was the hole in the table for the automated chip sorter. The lady dealer was scraping in all the chips at the end of each spin decision. Several players had joined us. And there were chips every where. I had no idea how the dealer was tracking the none coloured chips. At one point I was about to say to the dealer, you need a bigger hole, but caught myself at the last second.

Once I bled down to $100 I pulled the pin. I lasted awhile, but it’s as boring as watching grass grow. I find baccarat to be more stimulating and that’s saying something because I’m like a robot playing baccarat. In fact I can work on my laptop or phone and play the mini bac machines without missing a beat on either work or the game.

My friends lost their money at roulette as well. So it was now time to introduce them to craps. Which was my ultimate plan.

Grabbed my $100 chip from roulettte leftovers and they had just opened the craps table at 2pm. Both sides and all the old regular players from a year ago were there. Crazy. Two of the dealers remembered me. They should I guess I used to go every week. And I’m a courteous player and always nice to them.

With 2 virgin shooters on each side I thought my luck would be golden.

The table was very cold. No one could make a point. I noticed this and I shot from the dont’s both times I had the dice and set for the all sevens set. Why buck the trend. Lay double odds each time. Each time won.

On my last hand I wanted to back myself as I was getting my confidence back. I put $10 on the pass and point went to 6. I backed it with $25 odds. Alas five rolls later and 7 out.

For when my friends had the dice. I went $10 pass line. And my friend at SR1 went on the only decent hand of the session. 3 points made and going for his forth. About 17 rolls total. Made some money back on that hand. Was very happy for him.

My friend at SR3 was getting into it and she reached into her purse and before I could say no don’t do that, she throws money on the table mid roll just as the shooter at the other end of table got the dice. Hands in the bowel blocking the end wall, money now on the table stopping the shooter. The regulars were groaning. They could see she was new, the dealers knew she was new. But they appeared to be more upset with me for letting it happen.

Guess what the next roll was. You guessed it. 7 out. Way to make friends and influence people at the craps table. The regulars were not impressed.

It was very nice to introduce new players to craps. Super nice that the craps table is still there. And both sides open. A real treat.

One of my don’t bets didn’t get paid on a seven out. So I got the dealers attention and just motioned to my don’t bet that was still on the table. They paused for a second thinking about it. And just paid it. I was glad I didn’t have to get into It with them or the box.

I pulled the pin at -$180 after 1.5 hours. Slow cuts ground me out. Everyone was in the same boat. Now I normally have 50% stop loss limit which I stick to. This is the first time I went over it and I attribute that to having my friends there and not wanting to leave. I’m going to have to be aware of that more in the future.

The dealer tells me it’s been that way for 3 weeks. Ice cold. The streak is on. Should have stuck dark side. Oh well.

Now I have to tell everyone about the new casino being built in Brisbane. It’s called Queens Wharf. And it’s going to be huge. There are 8 cranes on site and I took a photo of the cranes. 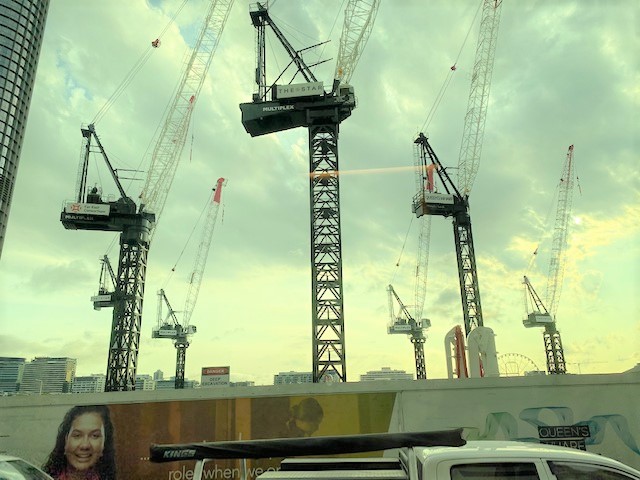 The other thing I want to mention is a shout out to Coach Fav from “Casinos USA” podcast. His latest episode was thought provoking about gambling addiction in general and being aware of your feelings around gambling. I’m a recreational gambler and I just happen to love craps, it’s my hobby. So much so, I have a home table and play at home to relax and focus on something other than work and family. A bit of me time.

I’d also like to thank Coach Fav for mentioning another podcast called “You Can Bet on That” hosted by Mark and Dr Mike. So I’m now going to pass along the same recommendation to my listeners. If you like to follow my Craps Journey you’ll really get into their show. Now I have no idea why it took me so long to start listening to their show. But I think maybe I thought I wasn’t interested in games other than craps, and I didn’t know how much they talk about craps. But I’m actually enjoying learning about other casino games and gambling in general. Make sure you subscribe and listen to their back catalog of episodes, which has proven to be no mean feat since they are nearly up to 200 episodes. And it’s nearly at 180 hours of air time in total. Congratulations to them for reaching 200 episodes which they will hit in the next few weeks. But what I like best is they are die hard craps players and very experienced gamblers in general, they have a great rapport with each other and clearly are life long friends that both enjoy what they do.

Until next time. Hope you got a little something out of this episode. Enjoy your Craps Journey.