We just had our annual Halloween party. And this year I was able to use the full table that I’ve talked about in previous podcasts and posts. Photo is below. Last year was just a makeshift half table. See episode 53 for all about that one and some photos.

With space for up to 10 players I was gearing up for a big craps session. We had quite a few new players from last year. And those that played last year were very keen but needed a refresher course.

I am still trying to work out the best way to get new players quickly into the game without completely confusing them with the myriad of bets that they see in front of them. Thinking back 25 years ago to when I first started playing craps I watched others and slowly picked it up that way. But I’m talking about quick ABCs to get started with little pressure. Perhaps you’ve got some ideas for me. If so let me know.

I’m going to instigate a standing Halloween party craps award. There will be 2. Craps champ with highest bankroll and golden arm with longest roll. I’ll get a little wall mounted award board where I can put up the names and show it off each year.

Another very interesting session followed where there were dark siders and passline players. Trying their luck with both sides trying to beat the game.

Each player had $150 of chips which I purposefully set low. I wanted to see if it would naturally end up with a more conservative betting approach than last year, where I gave them $300 each. It was a very different game to last year.

I was once again humbled that my party goers embraced dark side play on their first craps outing. You just don’t see many dark side players in Brisbane.

I explained the higher probability for rolling a seven over the other numbers each roll, and they just worked it out that dark siding would be a good idea.

That is until one of the players got on a monster roll. Over an hour. Banging out the place numbers. They couldn’t seven out. The prop bet players were left scratching their heads, wondering what was going on. Having lost a fair bit of money. Last year it was a horn number fest and they must have thought that’s a common affair and tried to do it again.

I had to call a time out for a drinks and desert break. Of course none of them know about energy draining events (EDE) and not to break the rhythm of the shooter. But I needed food and another couple of beers.

After the break they continued for a few more rolls and then 7 out. It was at that point I knew we had our golden arm winner for the night. They were very happy with themselves.

Someone asked me how I would have bet that hand. I felt a bit bad because I would have made quite a lot. Compared to what everyone else did. Even with a conservative press schedule, it would have left hundreds on the table.

It was then I realised that what they were missing was the benefit of watching what other more seasoned players do at the table. And picking up ideas of different bets to try and what the outcome of those bets are.

So in future even though I’m not going to shoot while I deal, I think it’s best if I deal and play as well. I can then explain the plays as I make them and the others can then play whatever bets they like.

It was a thoroughly enjoyable night. And I can’t wait to get last years and this years winners up on the wall. Then we’ll do it all again next Halloween.

PS For my fancy dress I called myself the dice doctor (if only) and had my eighties hair style back and dressed in scrubs. Definitely you would not want me operating on you. I looked thoroughly dodgey. 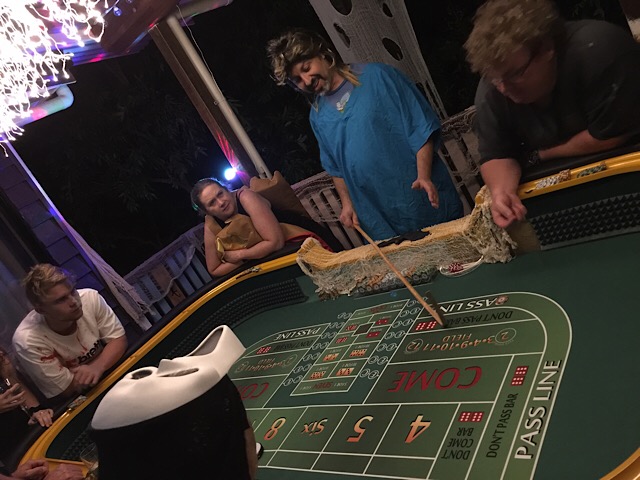