CJ 063 | My Own Craps Table Adventure

Well once again I have to start off by saying that I’ve been stopped from getting to the Casino over the last few weeks by my daily grind of family and work commitments.

They come first. And I come last. Such is life. I know I’m not the only one. I’ve been told it happens to all of us.

However I have not been idle by any means with my Craps Journey.

I have a few photos to share (see below), as I have spent considerable time to put together my Craps Table which was stuck in storage for nearly a year. So now is as good as any to dedicate a podcast episode for how my table came to be.

I’d been looking for a Craps Table for 2 years as soon as I started my Craps Journey, but being in Australia they are rare – in very short supply, and no one is selling them.

I had been talking with Big Jeff from Big Jeff’s Craps Tables in USA and he was going to help me build a table.

The only downside to that is that I don’t have the space, tools, skills or time to build a great table.

So I found a vendor in China by using the Alibaba network of manufacturers.

Of course this is a risky venture since you are buying a table from a manufacturer in another country that you only can see photos of what they produce (or supposedly produce).

With a lot of trepidation I was chatting with 2 vendors for over 1 month to pick the one that I thought would do the best job and most importantly deliver the table to me in Australia.

I’m not going to reveal the vendor that I ultimately chose, because as you will see they didn’t meet my expectations.

The table I wanted was an 8ft 2.4m table which was 4ft 1.2m wide. All of the tables they had previously built were only 1m wide, but I wanted it to be as wide as possible. I wanted the table to be portable. And by portable I mean, be able to be broken down and moved from room to room or place to place and put back together again. I have many videos on my how to build a craps table page of people building tables that can break down as needed. So I took ideas from them and put in some of my own and gave the vendor my instructions of what I wanted.

The table cost $950USD which I had to electronic money transfer to China. Now that was a 2 hour visit to the bank to make that happen. Which was like pulling teeth. You’d think I was the first person to try to send money to a bank in China from Australia, I was amazed and frustrated at the same time.

One month ticked away and I was eagerly waiting for some photos of my craps table (aka furniture art) from the vendor.

Finally I was rewarded with photos, and it looked impressive. Very clean job and well constructed. Of course what can you really see from a photo. In this case, it turned out, not the stuff I wanted to see.

I should have asked to see the table disassembled and with a clear showing of how to the table bolts back together again. But I didn’t. I was so caught up in getting the table to me.

The next stage after the build was harder than the actual build itself. The shipping.

What a nightmare doing shipping from another country into Australia. They don’t make it easy at all. And if you have anything that is out of the ordinary / large / made of timber, it’s even harder. For never having any prior shipping import / export experience, I had no idea what I was getting myself into.

First I had to engage an import broker to help me, since I could see I wasn’t going to be able to get this table into the country on my own. The broker provided me with all the forms, and more money was transferred to the broker to get things started. Lots of paper work then ensued to get the broker what they needed.

The craps table was packed from China in a shipping container with 8 other tables en-route to Sydney, which I thought was ok as it was more likely to get here rather than just on it’s own. But ended up being an issue as they weren’t going to Brisbane, they were bound for Sydney, only my table was coming to Brisbane.

What I’ve come to know is the extortion racket that goes on with importing goods into a country. The whole process is geared towards extracting the maximum amount of money from you at every step. And they know that if you don’t pay it, you don’t get your goods. So you have to pay.

I have mentioned to everyone since having done this import, that I have no idea how any company in Australia can afford to import goods into this country and make a profit. What an absolute joke.

Now for the good part. The container ship went to Sydney first to offload the other tables in the container, and I was extorted further money for that delay. The table then had to be reloaded and sent to Brisbane. However while all this was going on I got a call from Australian Border Force questioning the import of a Casino table. There is actually a TV show in Australia called Border Force where they film the real busts of people importing illegal stuff into the country. I was being questioned as I guess they thought I was going to start up my own Casino.

But it gets even better.

Once the table had made it to Brisbane and been put into quarantine for fumigation (because it’s a timber product) for a few days, it was released and I had 24 hours to get it out of the quarantine facility and to my home. The broker organised for me a delivery truck with a hydrolic lift on the back because of the large size and weight of the table.

The delivery driver shows up at my residential home (not an industrial setting) and says to me where’s my fork lift? He’s on his own and can’t lift the table off the truck. You’ve got to be kidding me. So I helped him drag the table onto the lift and got it down onto grass beside the footpath (sidewalk) outside my house. The table wrapped in a make shift crate of strips of ply wood that the manufacturer in China put together. By the time it was coming off the truck the low quality crate wrapping was falling apart. I should have taken a photo of it coming off the truck.

The truck driver says good luck and packed up and left. So I’m left all alone with a 140kg very large half falling apart crate and a second crate box that has the table legs in it, on my front grass outside of my property. I look up at the sky in defeat and what do I see storm clouds. My heart sinks again because it’s about to rain.

After all this effort, my table will be ruined before I even get it into the house. I had no one to help, no one to call, everyone I knew was at work, and my kids (late teens) and wife were not at home. With no time to spare, I got my large crowbar out, and started inching the crate into the property, like they would have done in the days of no machinery. It wasn’t even inching it was more like centermetering which is even less than inching. I dragged that bloody thing all the way to the side of the house about 20 meters, I needed to get it to my storage shed in the back yard which was about 35 meters away, but I just couldn’t move it any more. I was spent.

The rain was about to drop, in a last ditch effort I got a couple of wooden planks we had lying around and lifted the crate on it’s side and leaned it up against the house, and threw a tarp over it and wedged it upright with the wooden planks as struts. The rain really came down by my table was safe. I was a wreck.

The next day I was fortunate enough to be having some building work happening at the house, and I asked the builders before they started for the day if they would help me move the table into the storage shed. I stripped off the outer crate to reveal the table inside. It wasn’t in pieces as I’d expected. It was one big table all put together with no ability to break it down. What a slap in the face. I was very dissapointed as it wasn’t what I asked for and I knew it going to an effort to make it portable and how little time I have to do that work.

The builders were very impressed with it. Until they tried to lift it! It took 4 of us with great struggle to get it into the storage shed and safely leaning up against the wall. I covered the table again for protection, and that is were it stayed for 10 months until I got the time to cut it up into pieces so I could move it.

All in all, the table took about a month to make it’s way from China to Brisbane and then to my front door.

I’ll break down the costs.

That is a lot more cost than I thought it would be, when I first put the order in for the table. But once you start you have to keep going. I knew shipping was going to hurt and it did. It’s the unknown costs that got me with this purchase. If I had of purchased a table from the USA it would have cost about the same in the end.

Could I have built this table from scratch and cheaper. Yes. Would it have been as nice. No.

One more little twist to this story is that the Chinese manufacturer that build my table, has since sent me photos of tables they are now building for other people that are exactly what I asked for and designed to be portable. I couldn’t believe it. It’s been months and I still haven’t calmed down yet to respond. There really is nothing I can say that will change anything. So I haven’t replied.

I have grand visions of making Craps great in Australia, one of the ways to do that, is to get more Craps tables in Australia, which exposes more people to the game. I have a placeholder website www.crapstables.com.au ready to go, just need to work out the rest.

And now we are back at the start of this post / podcast and time to share some photos of the rebuild of the table and it’s first use in my soccer break up ‘Mad Saturday’ event. Which is a topic for another post / podcast. 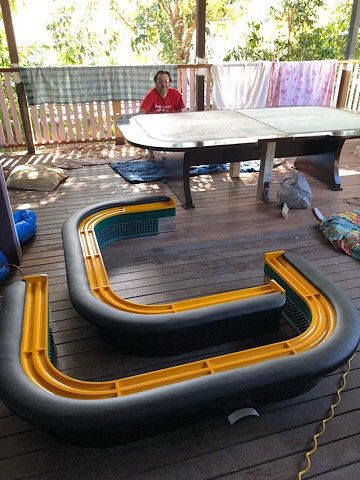 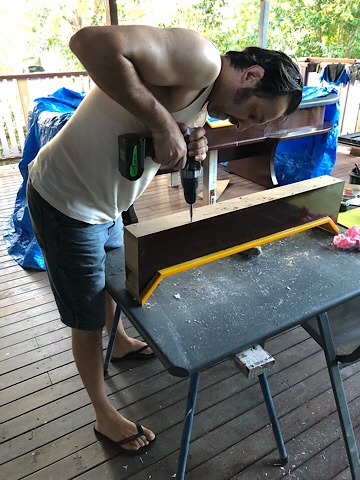 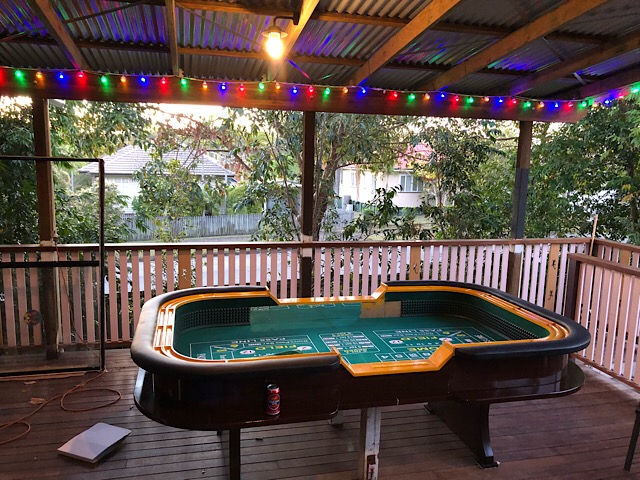 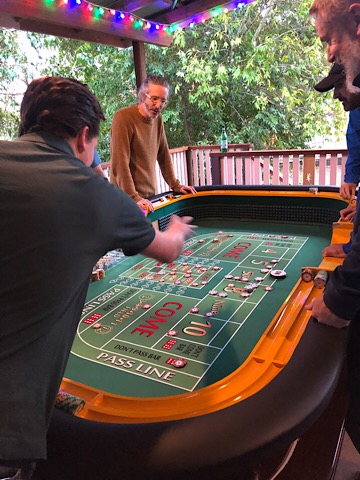 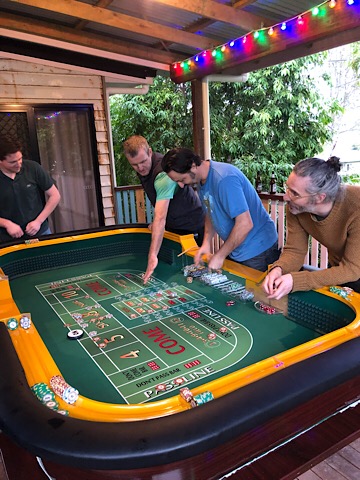